Ludogorets inaugurated the new stadium with a victory over Levski

Ludogorets, “the miracle of First Division”, inaugurated its new stadium with a victory over Levski, multiple champion of Bulgaria. 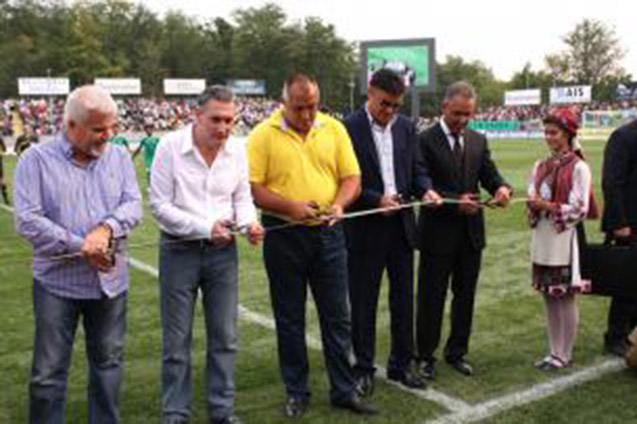 Ludogorets, “the miracle of First Division”, inaugurated its new stadium with a victory over Levski, multiple champion of Bulgaria. The ribbon of the new installation was cut by the investors Kiril and Georgi of the Domuschiev family, and the president of the Bulgarian Football Association Borislav Mihaylov, assisted by the Prime Minister of Bulgaria Boyko Borisov. Mayor Dencho Boyadzhiev was also invited to attend the ceremony.
Ludogorets Arena was inaugurated with a splendid program. Naval force’s general staff orchestra played for the event. The entire public participated in the show.
Ludogorets Arena was built in compliance with the highest requirements, in a record-breaking short term.Field is covered with a newest generation of turf, and the electronic scoreboard is a true beauty of the technology.
Work on the stadium continued up to the very last day, so as to approximately 8000 fans could enjoy the truly beautiful football that the hosts showed in their game against Levski.
“We are doing everything for the people. I’ve swept the stands myself, so as to everything be ready for the match today”, said Kiril Domuschiev after the victory over Levski.