Ludogorets was given the tenth championship title

Ludogorets won the sixth title with a record breaking score! 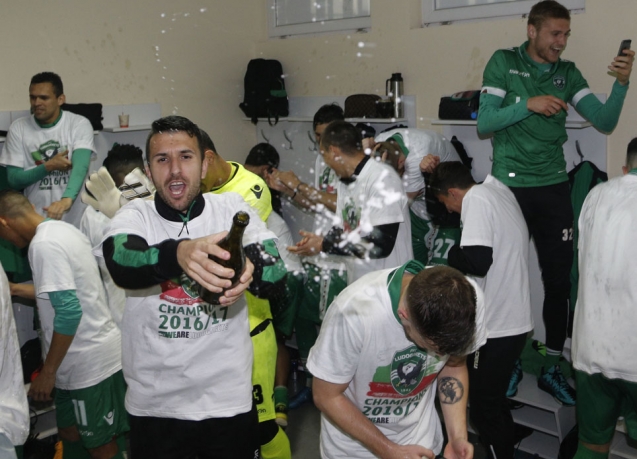 Ludogorets is Bulgaria’s champion for the sixth time! “The Eagles” won the title after dominating over Lokomotiv (Plovdiv) with a 3:0 score at “Lauta” stadium. Not only did they win the championship, but in their very own style the team broke the record for the most goals in a single season – 122. The previous record was held by CSKA under Manol “Simoliyata” Manolov’s lead in 1971/72 – 120 goals. This was also the earliest title they have ever won – May 5th.

The host team’s coach Voin Voynov was counting on a more defensive structure of his team and therefore replaced the suspended Vancho Trayanov was the central defense player Dimitar Vezalov. Georgi Dermendzhiev could not count on his goal-master Claudiu Keseru, who was suspended due to a few penalty cards. The attack was led by Jonathan Cafu and Lukas Sasha once again had to be re-qualified as a defender.

In the 2nd minute of the game the Braslian player stole the ball from Goranov, but his pass towards Cafu was blocked. Misidjan executed the corner shot that followed, but the ball went above the gate. “The Smurfs” showed their teeth – Kiril Kotev tried to score with his head but was not accurate. After that Kamburov got in control of the ball and passed to Umarbaev, but Renan intervened. Ludogorets opened the score in the 11th minute, when Wanderson shot from the corner point to the center of the field, and Abel Anicet was the quickest in the penalty zone – he overtook Kamburov and managed to score with his head. With this goal “The Eagles” reached CSKA’s goal achievement from season 1971/72, and Wanderson made his impressive 17th goal assistance since the start of the current season. After the first goal the pace slowed down, Georgi Dermendzhiev’s players were still in control of the ball and the host team was in their half. There were no exciting goal situations – only Wanderson and Misidjan had their opportunities to shoot, but without creating a difficulty for Ilko Pirgov. In the 38th minute the visiting team organized a quick attack, Marcelinho passed to Cafu, but his shot was weak and right into the goalkeeper. After that Ludogorets created two clean goal situations – the first ended up with Wanderson messing up a counterattack after he was alone against Pirgov. After the following corner Marcelinho shot towards the gate from a close distance, but also missed.

In the end of the first half the tension was too much. Dimitar Velkovski crashed into Marcelinho and both of them fell to the ground, after which there was a bit of a miff between them. Ludogorets’ captain Svetoslav Dyakov reacted emotionally and pushed the young player from Lokomotiv. Dyakov was immediately shown a red card, but also did Velkovski, despite the serious dispute with the referee. This way both teams were left with 10 players on the field.

The first goal situation during the second half was on Ludogorets account, but Natanael was no accurate enough. In the 54th minute Cafu and Wanderson interacted flawlessly and what was almost sure to be a goal was saved by Pirgov. Ten minutes later Veselin Marchev shot towards Renan’s gate, but he handled the situation well. In the 70th minute Marcelinho sent the ball into the other team’s net, but the goal was canceled due to the referee’s decision that there was an offside situation even though the Brasilian was at the exact same line with the last of the hosts’ defense players. In the 74th minute the excitement was pretty much over – the best player on the field, Wanderson, left no chance for Pirgov to intervene after a shot with his right foot outside of the penalty zone. In the 81st minute Wanderson passed ahead to Natanael who had no trouble to shoot accurately and turned the score into the classic 3:0. 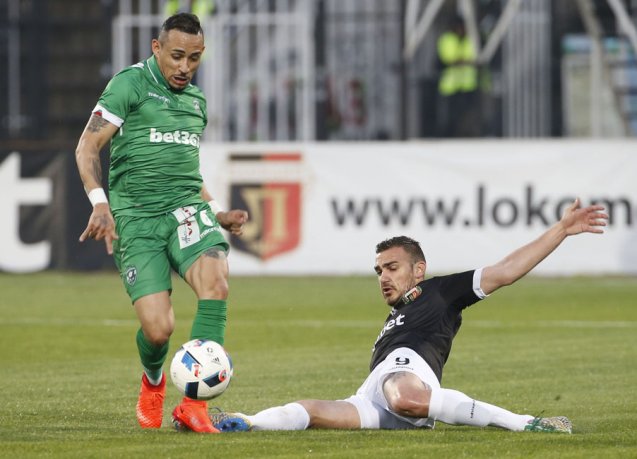