The A PFG leader Ludogorets defeated Pirin, Goce Delchev with 6:0 at their second friendly this month. 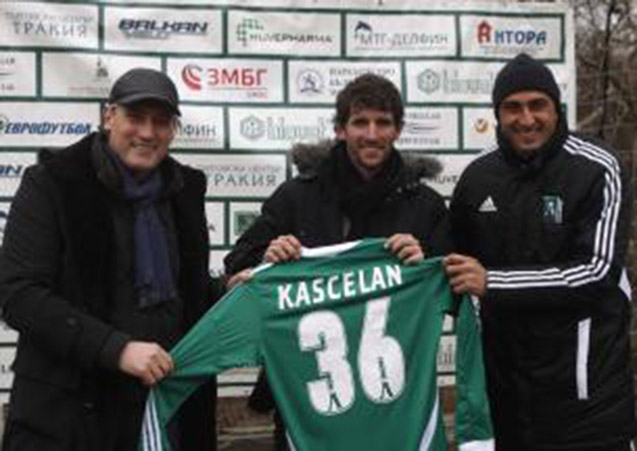 The A PFG leader Ludogorets defeated Pirin, Goce Delchev with 6:0 at their second friendly this month.
The owner Kiril Domischiev was part of the public to watch the renovated squad’s playing. During the break at the half-time he handed the number 36 green jersey to the last addition to “the eagles” – the Montenegrin national team player Mladen Kašćelan.
"This is the last enlisted player”, commented Domuschiev. “Winter selection is very hard. It is difficult to enlist perspective players, they are not free agents. But we managed. We have a serious competition in all the lines”, commented Domuschiev for “Gong”.
First goal to be scored was in the 16th minute, by Misho Alexandrov. He finished an attack, initiated by Quixada who drop-kicked towards Dyakov. He passed down to the scorer with head, resulting in a nice 12-13 meter shot by Alexandrov, scoring for 1:0. In the 33rd minute Emil Gargorov hit the cross-bar, however, 5 minutes later, with a skillful shot, he changed the score to 2:0.
During the break Ivaylo Petev made seven changes. However, after only 10 minutes on the field Christian Kabasele was injured and had to be replaced.
At the end of the second half-time shots were raining down at the opponent’s goal. That is when Pirin’s defender Fidanin couldn’t take a good control of the ball and in the 77th minute he drove it into his own goal for a 4:0 in favour of Ludogorets. In the last five minutes of the match scorers were Dimo Bakalov and Marcelinho.
Head coach of the team, Ivaylo Petev, announced that team’s goal in player transferring was the championship title, and Domuschiev confirmed his words for “Gong”: “With what we do and the team we’re having, it’s a realistic goal. The stakes should be raised. Ok, we didn’t expect a quick development, but since thing are going well, why shouldn’t we set higher goals? The reason for all we do is not just having Ludogorets, but making it a team for the others to reckon with. However, we won’t use all kinds of means, but exclusively football ones. We always respect the fair play, we’re concentrated in our own playing, and I’m optimistic that we will make it, whether other play against us using nose drops, cough syrup, or bribed referees”, stressed Domuschiev.