Ludogorets back on top

Ludogorets is the leader of A PFG again, and Stanislav Genchev is the hero. 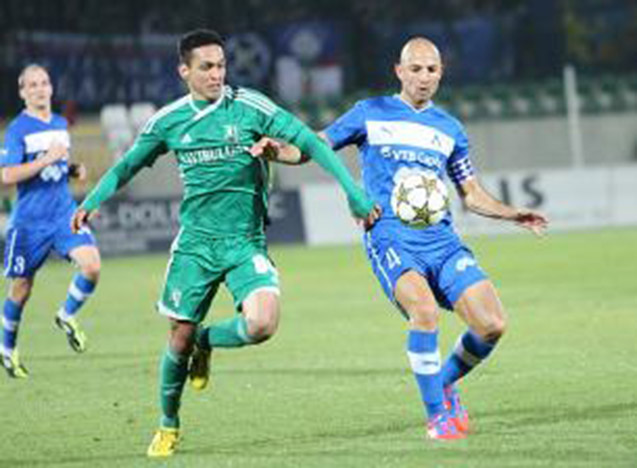 Ludogorets is the leader of A PFG again, and Stanislav Genchev is the hero. The Champions took Levski down with 2-1 in the 13th round‘s biggest match, which got them one point ahead of the blue team. Both of the goals for the hosts were scored by Stanislav Genchev (12‘, 58‘). The goal for the visiting team was netted by Iliyan Yordanov (47‘). The first part was entirely in favour of the home team – besides the goal scored they missed a whole bunch more. During the second half the two teams were more or less equal – after the goals scored, the game was frequently interrupted, with not much football to see.

Levski started extremely aggressively, guilty of three serious fouls in the first three minutes, showing clearly their intention to play rough on the field. That didn‘t scare Ludogorets and 6 minutes after the beginning of the match Marcelinho was already in a perfect position to score after a left sidekick from Miroslav Ivanov. The Brazilian took a powerful shot, but Stanislav Angelov blocked the ball. Five minutes later it was Ivanov again who had no difficulty passing through Mulder‘s zone. He took a shot but Vasilev cleared the ball. A corner kick followed, causing a mix-up in Levski‘s penalty box. Moti somehow got the ball and shot at the goal. The ball hit Dimov, then Elie, ending at Genchev‘s foot. The midfielder of „the eagles“ couldn‘t aim well, receiving the ball in the air, however, the goalkeeper had no chance to save – 1-0 for Ludogorets. The hosts were constantly attacking, trying to break down the flanks. The blue team, on the other hand, was counting on direct football, long kicks and counter attacks. In the 26th minute Ivan Stoyanov took advantage of the absence of Orlin Starokin, Levski‘s left back, and took a perfect side kick towards Marcelinho, who, from a short distance, kicked the ball out. Shortly after, there was an interesting situation. While a direct free kick in favour of Ludogorets was taken, Iliyan Yordanov, who was supposed to defend „the blues“ from a short pass, quietly knelt down to tie his shoe laces. Ivan Stoyanov took advantage of that. He entered unimpeded into Levski‘s area, but his heavy shot was cleared by Levski‘s goalkeeper. In the 35th minute, after another breaking down the flank, Miro Ivanov made a clever pass in Marcelinho‘s direction. The Brazilian was alone against Vasilev, but „the blues‘„ goalkeeper shortened the distance and managed to save his net. Levski‘s most serious goal scoring opportunity arrived in the 36th minute. After a counter attack started by Starokin, Basil De Carvalho got the ball. The forward saw Gadjev‘s perfect positioning yet he couldn‘t make a simple 3-meter pass, to help him break in alone on Golubovic. In the 39th minute Mulder covered a 2-meter offside and Marcelinho got alone against Vasilev. The Dutch, however, didn‘t make the same mistake twice and cleared the ball seconds before the Brazilian could shoot. Shortly after Levski‘s goalie had to intervene after Barthe‘s heavy shot.Levski‘s coach Iliyan Iliev made a change at half time. He sent Marcinho to replace Hristo Yovov. 120 seconds later the change showed results. In the 47th minute after a side kick from the right by Muler, Marcinho sent the ball at Yordanov‘s feet. Feinting the hosts‘ defender, the wing took an accurate shot, netting the ball for 1-1. The goal stupefied the home team and shortly after the ball passed centimeters away Ludogorets‘s crossbar after a crafty kick by Gadjev. This leads to the 58th minute when Stanislav Genchev scored a fantastic goal for 2-1. He received the ball from a throw-in, broke down the penalty box line and sent it into the net. That‘s where the game ended. Levski tried to tie it up by the end of the match, but there was no risk at Golubovic‘s goal.

Ludogorets won the match and the blue team still has no points against „the eagles“ – three losses. 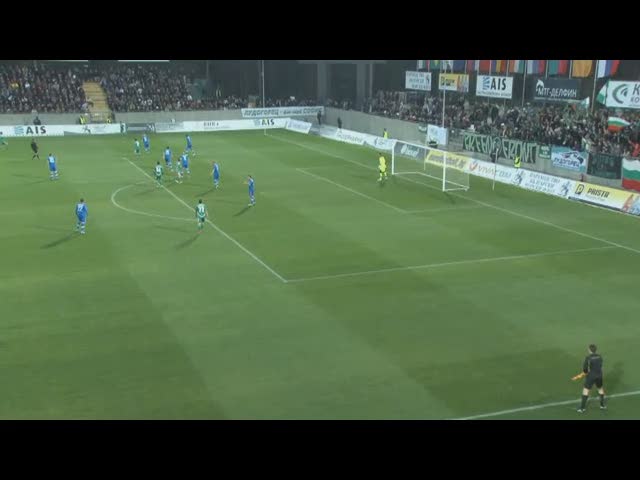