An incredible twist and first victory of Ludogorets in Antalya

The team of Tavria provoked Ludogorets with their rude playing and they got what they deserved. 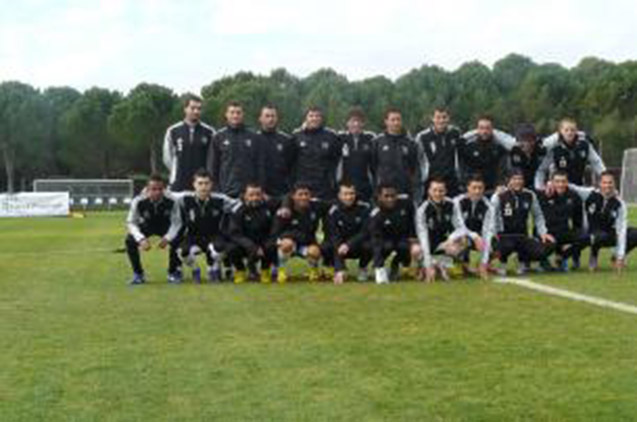 The team of Tavria provoked Ludogorets with their rude playing and they got what they deserved. In just one half-rime the Ukrainians got four goals scored against them, having in mind that until the break they were leading with 2. The two teams played a friendly in Belek, Antalya. The match ended with 4:2 for “the eagles” and this is their first win from the friendly matches played on Turkish land.

From the very beginning of the first half-time the Ukrainians started playing extremely rude, receiving two red cards. Since there was a preliminary arrangement for replacement of expulsed players, Tavria’s footballers decided that they were allowed to do whatever they wanted and they were committing fouls one after the other. Their tactics was obviously successful for them, because they managed to take the lead. First goal was scored from a penalty shot. A drop-kick by Kubik in the 32nd minute, the ball hitting Yordan Minev’s hand, ending as 1:0, scored by Feshuk. Yordan Minev was awarded a yellow card, because he was standing in the penalty area at the signal for taking the penalty kick. In the 41st minute, after a mistake in Ludogorets’s defense, Feshuk was taken behind the defenders, he passed over Golubovic and got the ball in the empty goal for 2:0.

Despite of the positive score the Ukrainians carried on with their rough playing, which provoked a sharp reaction from Ludogorets’s management. The owner of the Club, Mr. Kiril Domuschiev explained personally to Tavria’s coaching staff that he wouldn’t allow such violence over the boys, and he asked for players with red card not to be replaced during the second half-time.

It was effective and Ludogorets became a full master on the field for the second half of the game.In the 63rd minute Svetoslav Dyakov took a penalty kick, the goalkeeper saved, but Dimo Bakalov assisted and scored. Penalty shot was taken because of a serious offence of Adeley against Vitinha. The equalizer for 2:2 was scored in the 70th minute. Ludogorets was awarded a direct free kick, taken by Stanislav Genchev who shot, the ball hit Marcelinho at the penalty area and got in the goal.

The ultimate twist came on in the 83rd minute after a good counter-attack of Ludogorets – Quixada caught out a drop-kick by Ivan Stoyanov, the goalkeeper saved it, but Yordan Minev assisted with head for 3:2.

The final goal in the match was scored by Stanislav Genchev. Ivan Stoyanov got a good pass at the penalty area, reached the outline and kicked towards Genchev, who, at an empty goal, scored for 4:2.

The Head coach of Ludogorets staked on the following starting eleven: Golubovic, Minev, Barthe, Guldan, Dyakov, Marcelinho, Gargorov, Alexandrov, Bakalov, Vitinha, and Kascelan. After the break Ivan Stoyanov and Stanislav Genchev made an appearance, and so did Quixada, Choco and Mantyla later on.